Every year, we tackle a variety projects based on how much we raised for construction in the previous year. These projects fall into several categories that may overlap, such as major maintenance, long term renovation, or government requirements. Due to Covid-19 and a prolonged monsoon season, the work took longer than anticipated. Our kids haven’t been at LDA full time since the end of March, so delays did not impact their safety or education.

Thanks to the generous support of donors in 2019, we accomplished the next stage of our long term renovation plan – demolition of an unusable portion of the building and new underground water and septic systems. This renovation plan became necessary several years ago when the government informed us that not only did we not have enough restroom stalls for 300 students, but that having the restrooms in a separate building was a safety risk. They’re not wrong about either of these issues. LDA was built in 1988 for about 150 students. There were no restrooms in a commercial building in the area (there were not, in fact, any other buildings that were solely commercial). LDA was a new concept in Dehradun at the time – a private, secular, charitable school for children of any gender. At the time, it was perfectly acceptable for boys to just ‘go’ wherever they wanted but girls couldn’t (and still can’t). Since we couldn’t solve this challenge on a large scale we focused on what we could solve by giving our kids and staff onsite restrooms separate from the main building since at that time, attached restrooms would have been culturally inappropriate. When we added the first floor in the 1990’s we included a staff restroom (India uses the ground floor/first floor system).

Demolition of Unusable Portion of LDA

Before we could work on the underground tanks, we demolished a portion of the building that was permanently damaged by water and mold in the horrific monsoon season of 2013. This area of the building was a later, self-contained addition to the main building mostly used for storage, and also had an outdoor staircase to the first floor that had become unstable. To comply with recent fire safety regulations, we installed a temporary iron stairwell so that our first floor would still have two egress points. Cost: INR1,26,000 (euro:1,407/USD1,708) 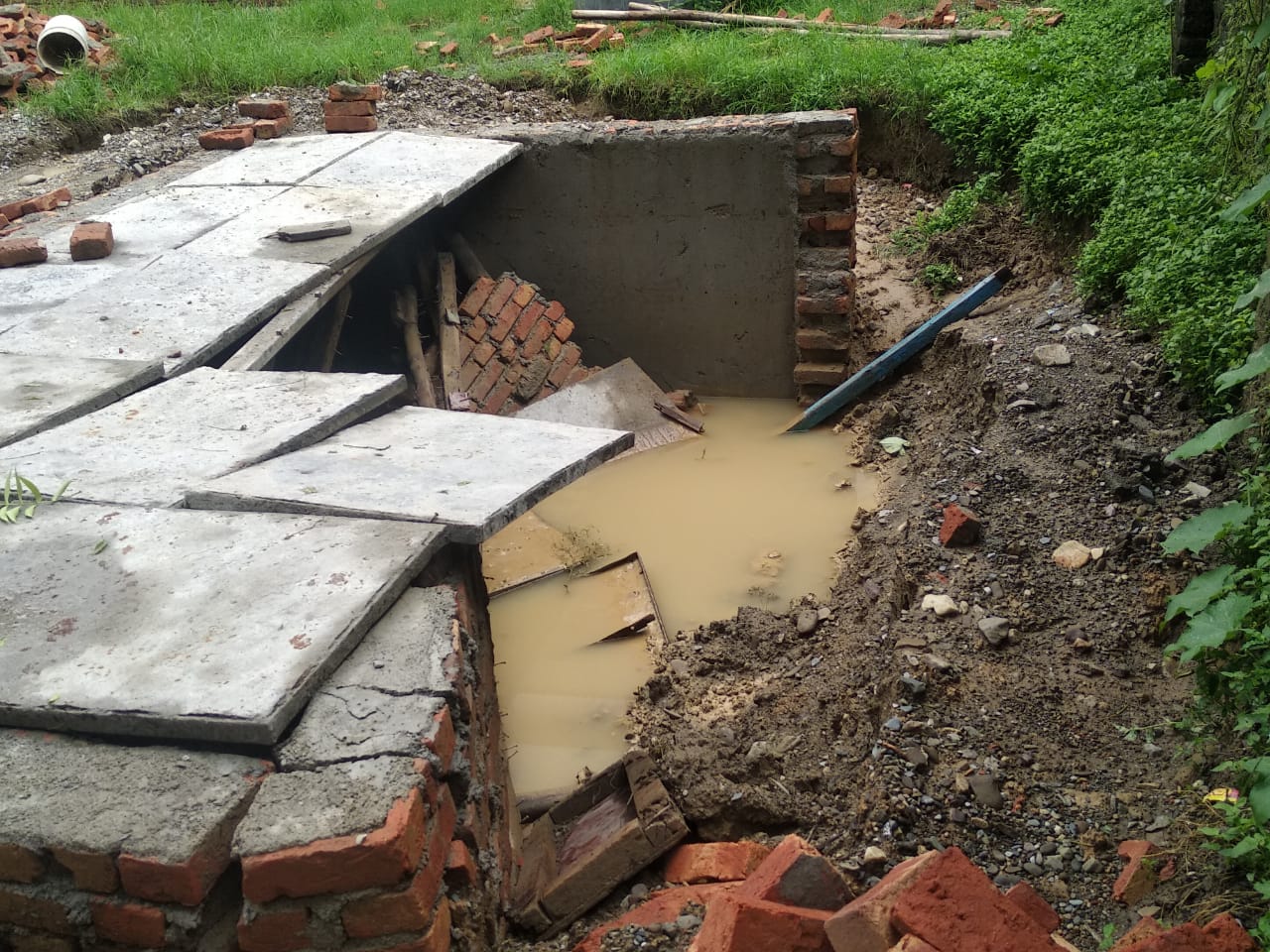 Once the demolition was complete, we started digging to install three underground tanks – water for septic, septic, and a 10,000 litre (2,641 gallons) water tank for drinking and hand washing. The septic tanks had a few delays but in general went as expected. The water tank – not so much. We dug and installed the brick lining. Then the monsoons started. The brick lining collapsed. On the less rainy days, we tried two more times to install the brick lining. Finally, we realised that it wasn’t the down pouring rains that were toppling the brick lining but a previously unknown underground stream that, during the monsoons, was as powerful as a small river. We rented an industrial water pump to pump out the accumulated water before work could continue.

Mr. Maindola advises Rajinder and Beni on how to fix the broken underground water tank.

Since there’s no other suitable location for this tank, Mr. Maindola, our architect, and Ashish, our engineer, advised us to build an iron structure into the walls of the big hole before installing the water tank. It was fortuitous that delays caused us to build this tank during the monsoons or we would not have known that we needed significantly more underground support.

Building the tank with an internal iron structure solved the problem.

This project cost more than anticipated due to the repeated attempts to fix the brick lining, the additional cost of the iron structure and cement to hold it in place, and rental of the pump. Cost: INR3,38,000 (euro:3,775/4,583) 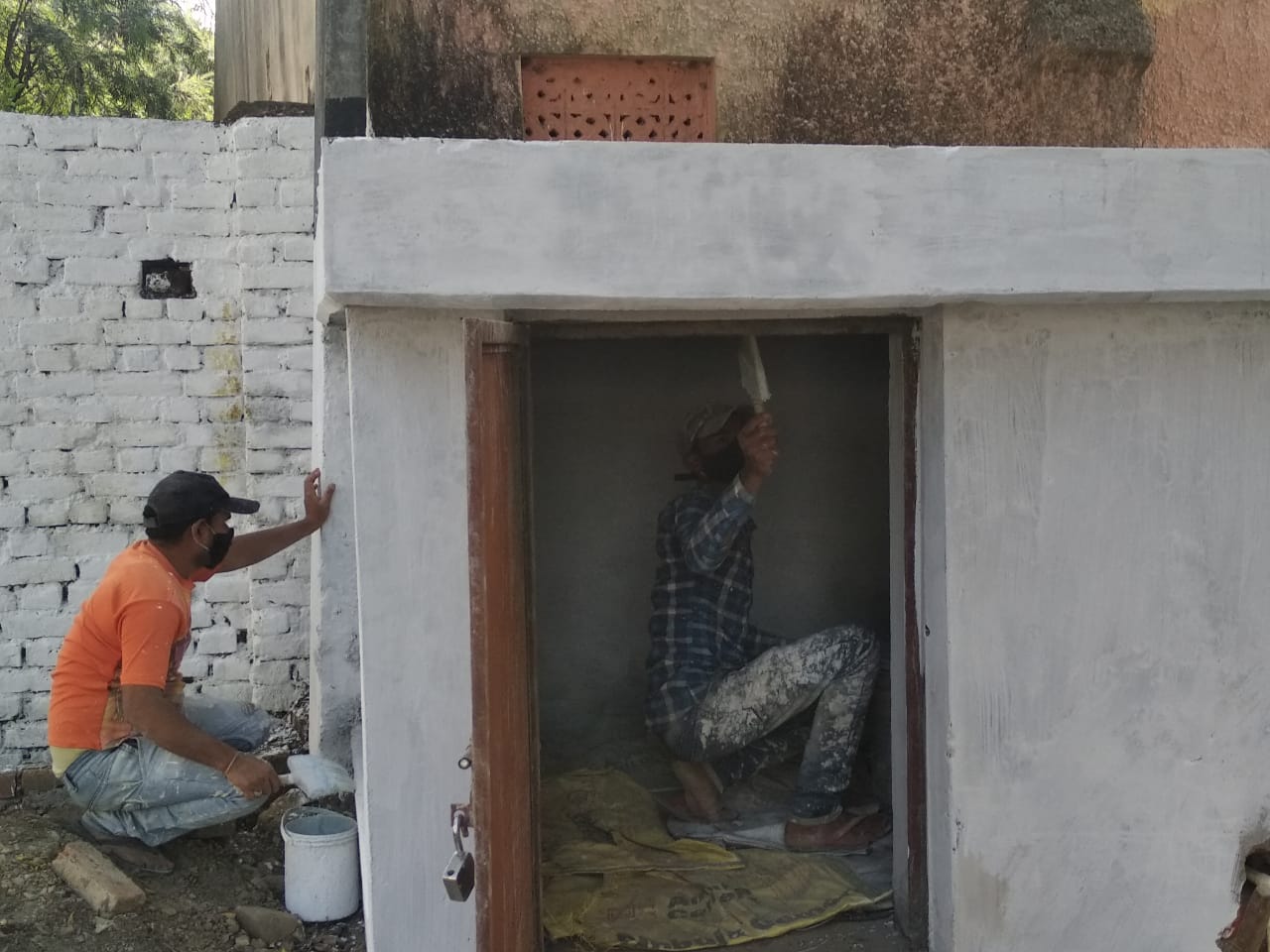 The underground water tank needs a motor. The old motor was housed in the now demolished addition so we built a small, free standing motor room and installed our old .75HP motor. We’ve ordered a 5HP motor. The fire department will install the new motor when it arrives. Due to the lengthy monsoon and many Covid positive employees in their office, their work has been delayed. Cost: INR59,840 (euro:671/USD812)

Recent fire department regulations require that a building the size of LDA have a separate, non-powered source for water in case of a fire. On our flat roof we built a sturdy platform to hold 4 water tanks of 2,000 litres (528 gallons) each. In addition to installing the new motor, we are dependent on the fire department for portions of this project. When they’re back up to speed, in addition to installiing the new motor they’ll install hoses and other accessories necessary to use the roof tanks. They have already installed a line from the underground tank to the roof tanks so that the roof tanks can be filled. Cost: INR2,38,000 (euro:2,659/USD3,226)

Moving these tanks to the roof took hard work and ingenuity.

We completed a few smaller, but necessary, projects, as well: 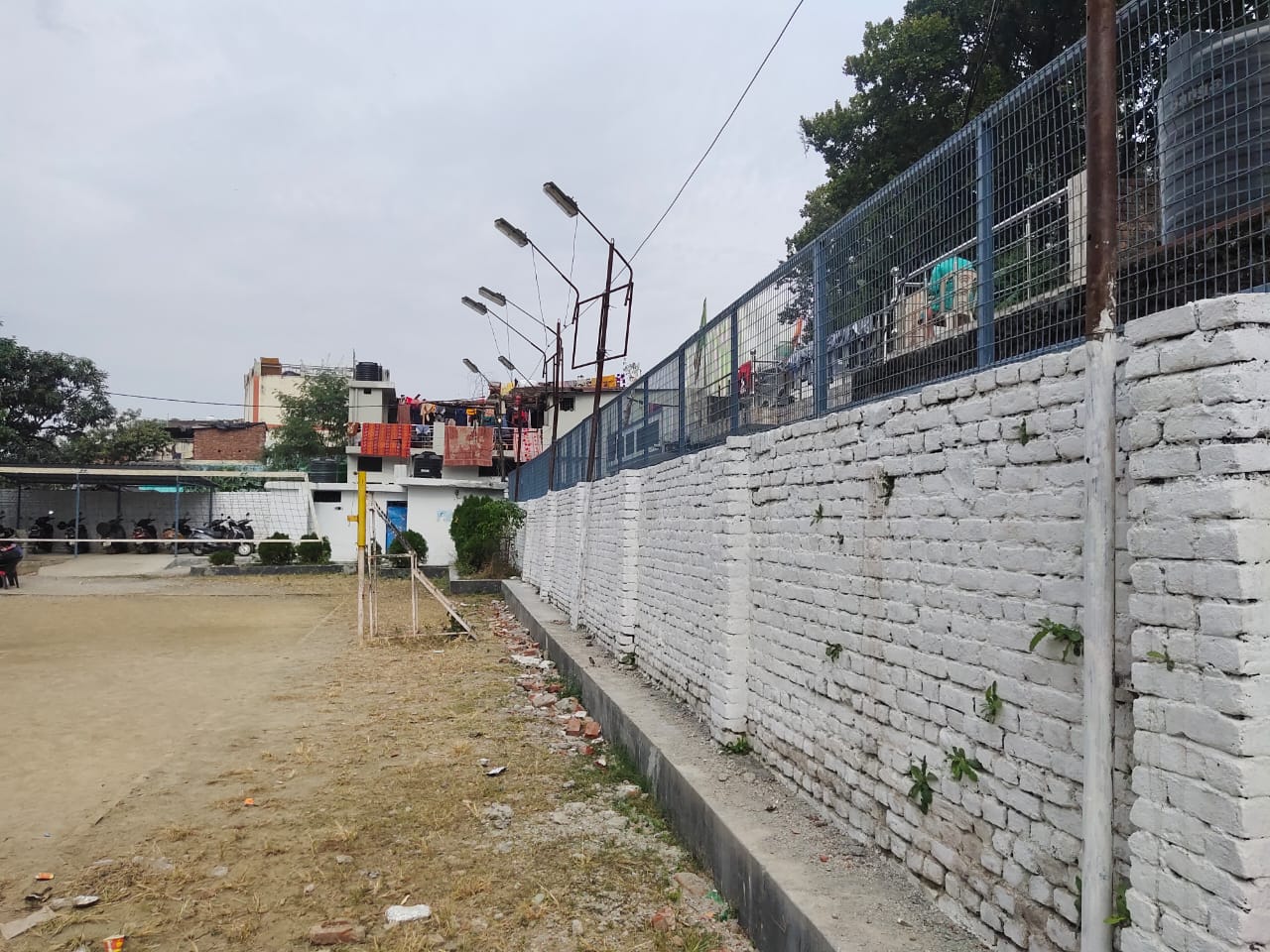 Boundary walls: one of our boundary walls borders several private homes. Because their properties don’t have adequate drainage, during monsoons they knock bricks out along the base of our wall. This floods our grounds, and sometimes the school building. Now, we have concrete seating along that wall making it thicker so that bricks can’t be removed from the other side. Not only does this protect our property, when the children come back to school there will be more outdoor seating for them; since we don’t have space for a dining hall, eating outside means sitting on the dusty ground. There are a few spots along our boundary wall that needed repairs, so we took care of those, too. We also raised the wall in some areas, and added iron netting in other areas to make it more difficult to get over the walls. All the walls were white washed, and so were the tree trunks, which protects them from termites. Cost: INR1,70,000 (euro:1,900/USD2,304)

Roofs: the roofs that cover the school building and parking shed are iron. We painted them with an anti-rust paint. Cost: INR63,000 (euro:704/USD854)

Main gate: new government regulations mandate that our gate needs to be 7.5 feet. Since our gate wasn’t in compliance, we replaced it with a taller, more secure gate. Cost: INR45,000 (euro:503/USD610) 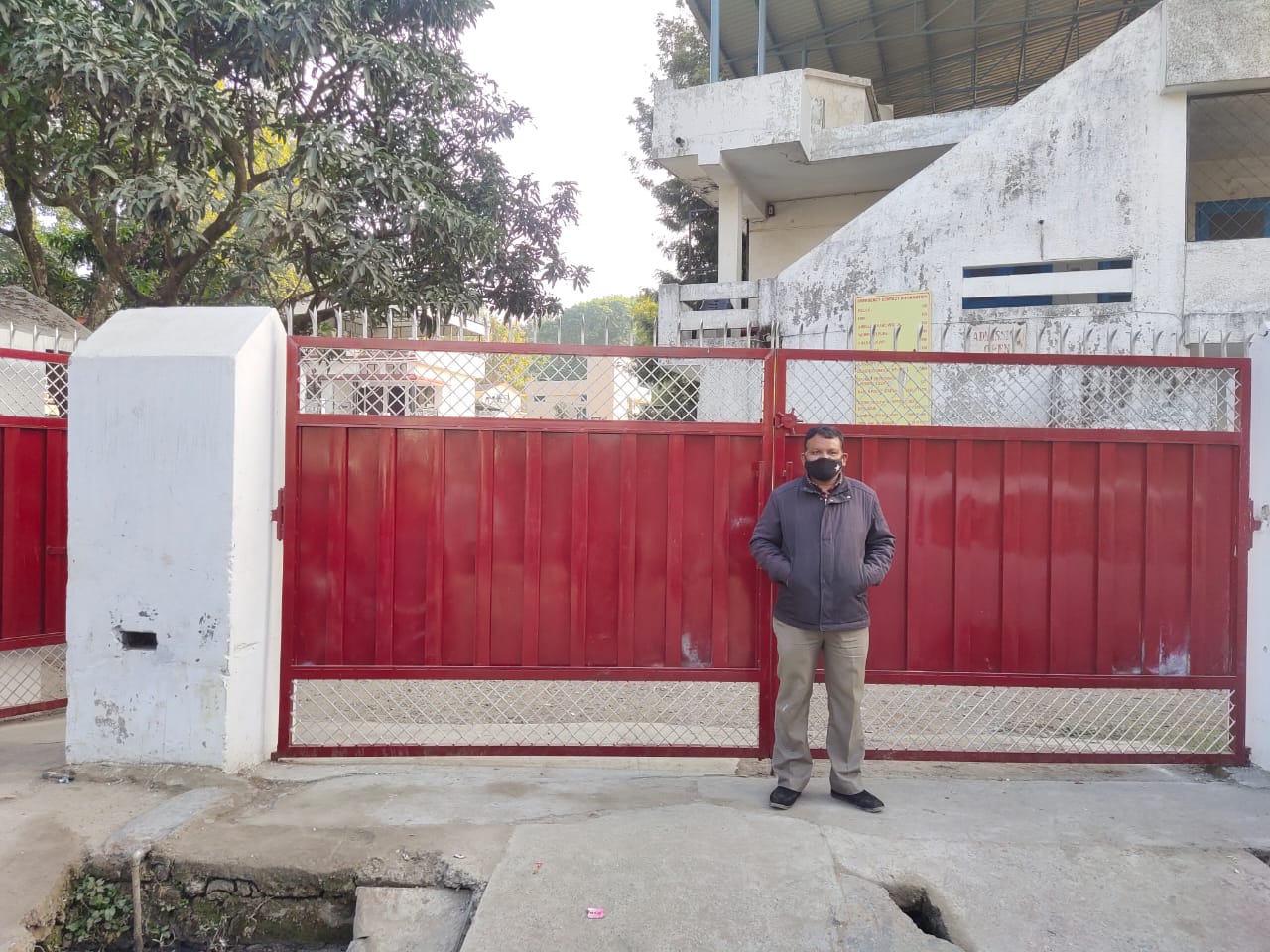 Sunil, our Day Guard, stands outside LDA in front of our new gate.

Adding drainage along some walls protects the building and grounds during the monsoons.

Drainage: We raised our small gate to keep the bottom of it from rusting when it rains. We added drainage along a couple of the walls to direct heavy monsoon rains out to the street drains. These are open drains so they’re easy to clean and repair. Cost: INR11,000 (euro:123/USD149)